Here’s your chance to enter the NBA’s official esports league! 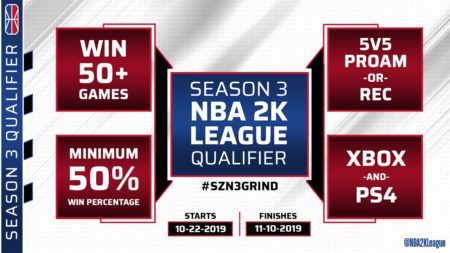 The NBA 2K League has announced that the first stage of qualifiers for Season 3 will run from October 22 to November 10.

Players looking to make it to the league will be required to win at least 50 games in NBA 2K20’s Pro-Am Team Arena or at The Rec and maintain a 50% win rate in their games in order to advance in the process.

The Pro-Am competition will have a 5-on-5 format with participants using their existing MyPlayer characters, following that of official NBA 2K League games.

During the qualifier period, an NBA 2K League tab will appear on the NBA 2K20 menu that will help aspirants track their progress.

The qualifier is open to anyone around the world who has a copy of NBA 2K20 on either the PlayStation 4 or Xbox One, an internet connection, and is 18 or older by the time it begins.

The NBA 2K League will also be hosting international tryouts with selected top players from outside North America to bolster the 2020 draft pool with international talent. League-sanctioned amateur Pro-Am tournaments worldwide may also award spots in the draft for top performers.