Team Liquid did not have any easy first game though. 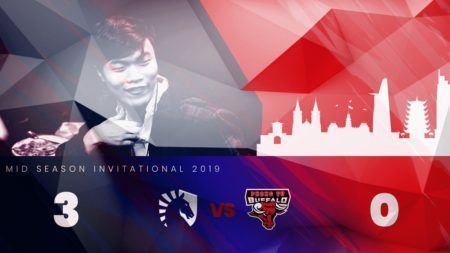 Team Liquid showed off why it’s one of the top League of Legends teams in the world, sweeping Phong Vũ Buffalo (PVB) 3-0 to advance to the MSI Main Stage.

It was an aggressive early game for the bot lane, as supports TL CoreJJ and PVB Nguyễn “Palette” Hải Trung lost both of their summoner spells in a trade-off.

During the first ten minutes of the match, PVB held its own against TL, getting kills on tower dives and widening the gold gap. At one point in the game, PVB took down all of TL’s members in a dragon fight.

However, just as things started going smoothly for PVB, Team Liquid managed to turn the tide and bounced back during a 23-minute clash, taking down PVB Võ “Naul” Thành Luân’s LeBlanc and PVB Palette’s Galio.

The match started getting better for the NA team from there, as TL took down Baron Nashor and used the buff to their advantage to push lanes.

With their flawless crowd control, Team Liquid managed to kill four of PVB’s members in a messy late-game fight, earning the team their first victory at the MSI 2019.

Despite their awesome run at the Play-Ins, Phong Vũ Buffalo lost the next two games and falls to the lower bracket. The Vietnamese team will have to take on Vega Squadron next for the last spot at the Main Stage, which takes place in Taipei in a week’s time.