While Samira received a much needed nerf. 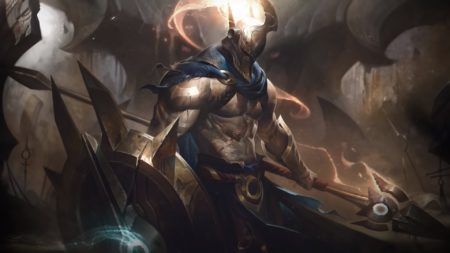 In the last patch of the year, Riot Games tackles a second round of balance changes to preseason 2021 in 10.25. Most significantly, Anivia and Pantheon received substantial buffs. Marksmen and support items too were buffed, and tank items took a hit.

In total, 17 champions were buffed in patch 10.25, primarily because of the way the preseason items affected their effectiveness, while seven were nerfed. Rell, League of Legends’ newest support, also rides into the Rift in this update.

Here are the winners and losers of patch 10.25:

A champion that has not been on the radar for years, Anivia has suddenly been buffed substantially by Riot. From virtually unused, she shot to the top of Korean solo queue within the first few days patch release, and now is the highest win rate champion in mid at 53.46% according to OP.GG at the time of writing.

The feathered frost queen has always been a slow champion in all sense of the word. In this patch, her basic attack animation has been increased, alongside Flash Frost (Q). Frostbite’s (E) base damage has also been buffed, now costing a flat 40 mana, while Glacial Storm’s (R) cooldown and cost has noticeably been decreased.

To balance these changes, some tweaks to damage and mana cost have been made on each ability, but overall, it looks like Anivia will be soaring much higher now.

Ivern is a champion that is meta dependent due to his unique playstyle. He has received a series of buffs since patch 10.7 this year. In this patch, Riot increased the base damage of Triggerseed (E) and Daisy! (R).

They also lowered his cooldowns on Q and E, increased his shield power due to the removal of Athene’s, and gave Daisy marginally more basic attack speed. Riot recognized that preseason’s shift to ability haste has impacted him, but without a shift in the overall meta, these changes help solo queue junglers the most.

At Worlds 2020, Pantheon was used as an engage support and hasn’t been seen in the solo lane. “We’re shifting more power into a bruiser-y playstyle by giving him a higher uptime on his Q and equipping him with more selfish outputs like armor penetration at the cost of utility (i.e. strong invulnerability), slows, and most importantly, a massive movement speed boost for when he crashes onto the scene,” wrote Riot.

Key utility features that they removed which made Pantheon a great support is the slow on Q, and invulnerability from E. That said, base damage on W, the increased movement speed from E and R, and added armor penetration might just empower him even more as a support, especially considering the current state of ADCs.

Even though AP Twitch surfaced in the preseason as an OP build, Riot still feels that “both AP and AD Twitch are significantly underperforming”, and rightfully so from his current low win rates in solo queue. They want to be inclusive to both playstyles, so they’re buffing AD Twitch now in this patch after increasing his AP ratios in patch 10.23.

The cost of Bandleglass Mirror, Chemtech Putrifier, Ardent Censer, Staff of Flowing Water, Moonstone Renewer, Locket of the Iron Solari, and Shurelya’s Battlesong were decreased this patch, for Riot recognized that some of these builds were too costly for a role that doesn’t receive much gold.

That said, do note that Imperial Mandate was nerfed as Riot does not want it to be an optimal build used in the solo lanes. As such, they’ve decreased it’s base damage, and increased ally damage.

Galeforce, Essence Reaver, and Lord Dominik’s Regards’ base damage were increased by five. The cost of Zeal, Rapid Firecannon, Phantom Dancer, Mercurial Scimitar and Mortal Reminder were all decreased.

To top it off, Infinity Edge was given a big buff, where instead of granting critical strike based on crit chance, it now grants 35% Critical Strike Damage if you have least 60% critical strike chance. Overall, these changes helps marksmen scale harder into the late game.

The much needed nerf is to her ultimate, Inferno Trigger. Finally, instead of 100% crit life steal effectiveness, it has been lowered by a third. Not to mention she will no longer be able to knockup enemies with her passive, but instead, will now only keep already knocked up enemies in the air for half a second.