Riot Games has released countless League of Legends skins in the past, and some of them have really stood out from the rest, like the recent human skins for non-human LoL champions.

How unique LoL champions and creatures blend in as humans

Crocodile Renekton and “broken coffin” Xerath have both been turned into full-fledged humans in their latest skins PROJECT: Renekton and Arcana Xerath.

With the growing number of these kinds of League of Legends human skins, the latest release of Ask Riot explained the company’s process in creating them for other-worldly champions.

However, this type of skin adds complexity to the original design of the LoL champions. Designing human skins can impose a big challenge for the team, since they still have to keep what is considered the core of that champion’s image, as well as find a suitable theme for them.

“There can be a lot of challenges in this space since we have to make sure we’re hitting the gameplay clarity bar and creating something that will work with the existing rig and animations,” explained Riot Eggo McLego.

PROJECT: Renekton has turned the crocodile champion into a human who controls crocodile-shaped combat armor.

Riot Games even crafted a completely logical storyline, where a person undergoes a body upgrade, then controls the inside of the armor, which perfectly fits the PROJECT theme.

The human aspect of the Arcana Xerath skin is more visible to players. The design team did a great job of keeping the core of the champion in shape to show off a completely new (but not too farfetched) Xerath.

Going back to last year’s skins, the Spirit Blossom skin line also presented Thresh and Kindred in a new light. 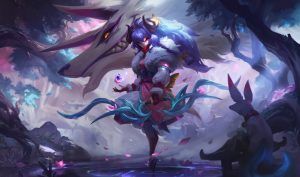 There will certainly be more human skins in the future to help non-human champions gain more popularity. Can we expect Anivia to appear as a snow princess, or Rek’sai as a charming queen in the next LoL champions skin drops?

READ MORE: What is the ‘Mathematically Correct Sett’ build and why is it so popular?