Evil Geniuses hunt down Golden Guardians for the game-winning ace 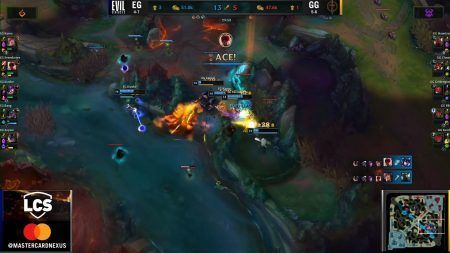 Evil Geniuses pulled off an impressive ace against the Golden Guardians in Week 6 of the League of Legends Championship Series.

Although EG was ahead on kills and dragons, GG had a fairly defensive setup and a potential super carry in Victor “FBI” Huang.

Looking to engage as soon as possible, Dennis “Svenskeren” Johnsen immediately dived into Yuri “Keith” Jew and FBI while the other EG members locked their sights on the rest of GG.

Although Kumo initially targeted Closer, the Sett player performed a Showstopper on Keith to deal massive damage to FBI.

Right before impact, FBI flashed out of the way to save himself from death. Unfortunately for the Aphelios player, Kumo flashed right into him for a deadly Haymaker to 1-2 punch combo.

With GG’s main damage source out of the picture, Tristan “Zeyzal” Stidam and Kumo eliminated Keith to put the fight in their favor. With EG now having the 5v3 advantage, they proceeded to delete the rest of GG.

With the late-game ace, EG closed out the game against Golden Guardians, improving to third-place with a 6-6 standing.