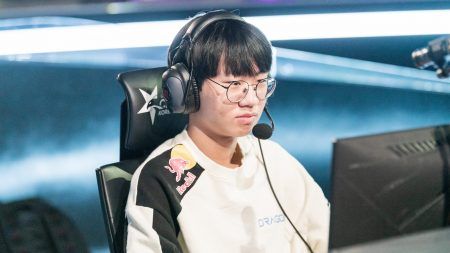 DragonX dominated SANDBOX Gaming during their match in LCK Week 7. While DRX controlled the game throughout, it was this highlight play that sealed the deal in game one.

Just as the game was reaching the 30-minute mark, SANDBOX were setting up for a flank from the jungle, but DRX’s Choi “Doran” Hyeon-joon caught them off-guard.

With a quick flash into the SANDBOX trio, Doran stunned them with a Facebreaker. The Sett player continued his initiation with a Show Stopper on Moon “Route” Geom-su, handing him to the rest of DRX.

With Doran and his defensive Haymaker soaking up all of SANDBOX’s attacks, Kim “Deft” Hyuk-kyu and Jeong “Chovy” Ji-hoon unleashed all their bullets and arrows from the back-line.

With one more Facebreaker, all of DRX stood tall after the clash, securing the ace and the triple-kill for Deft.

DragonX went on to win the series 2-1.