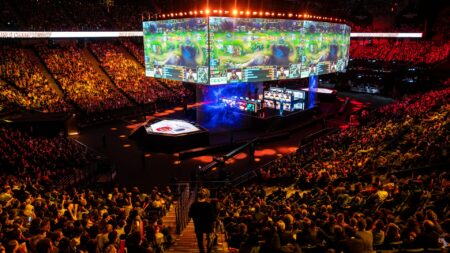 Ready your fast hands and keep your credit cards nearby — it’s time to book your Worlds 2022 tickets!

From Mexico to California, the stages are set for this year’s League of Legends World Championship. The annual tournament will be held across different cities in North America from September 29 to November 5.

With about a month and a half left before the Play-In stage, Riot Games has announced more details about Worlds 2022 tickets and when and where to buy them.

Ticket sales for each stage of the event will roll out in two phases.

Where to buy Worlds 2022 tickets

For the Play-Ins, fans can purchase their tickets on Cinemex’s website when it goes live.

As for the later stages, Riot Games has yet to announce the website(s) on where to buy tickets.

Excluding the Play-In stage, Mastercard holders are eligible for presale tickets for the Group Stage, Quarterfinals, Semifinals, and Finals. Mastercard is one of the global partners of Riot Games for the event. More information about this will be released soon according to an official announcement by Riot Games.