The Meta Report: Why you need to be playing Rumble Support and Soraka Top

Keep up to date with season 10’s unusual picks. 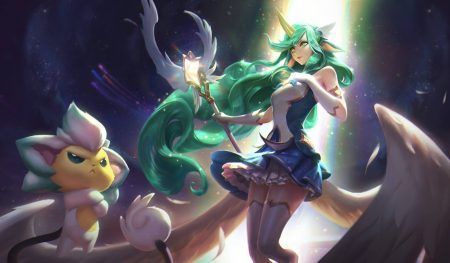 The first three patches of Season 10 are shaking things up in the Rift. At the end of Season 9, many champions were nerfed, runes were changed while items were adjusted.

Powerhouse ADCs, Xayah and Kai’sa, who saw a lot of game time during the 2019 World Championship, have been replaced by Miss Fortune and Aphelios. Paired with a buffed Leona, Nautilus or Thresh, games have been action-packed.

There are two champions however that haven’t changed in recent patches, yet are making waves in solo queue and professional play.

We had Rumble in the jungle in Season 8. Now we have Rumble Support in Season 10.

An OP sleeper for half a year, Rumble was buffed back in 9.7. His bonus movement speed on Scrap Shield [W] went up by 10% while Equalizer [R] was given a lower cool down.

When the League of Legends Pro League (LPL) started this year, Rumble was and still is a strong pick that can be flexed in mid and top due to his high base numbers.

Even without items, he hurts. What’s more, Electro Harpoon [E] with Arcane Comet allows him to poke, which is why pro players have started to play him as carry support at bot.

When Leona or Nautilus goes all-in on him, his shield gives him a lifeline. If they are unable to burst him down, the return damage from Flame Spitter will turn the fight around.

The first time he was flexed victoriously in professional play, AFs Son “Jelly” Ho-gyeong teamed up with Jin “Mystic” Seong-jun on Ashe against Griffin in the LCK. When Ashe lands an Enchanted Crystal Arrow, it guarantees Equalizer hitting as well.

Rumble also opens up more synergy in the bot lane, giving teams the option to draft double AP. Paired with a hard CC mage, double AP means poke, burst damage and kill pressure all in one.

Even though Rumble’s shield and movement speed were lowered in patch 10.3, he is still strong and will remain in the meta.

The last time Soraka was buffed was way back in patch 9.10 after she received a nerf to her base numbers in 9.9. Starcall [Q] was given an extra 5% movement speed at max rank and decayed “significantly less rapidly”.

She is now flexed into three roles: Top, Mid, and Support. If you’re a melee champion going up against her, you will feel the pressure of constantly trying to dodge Starcalls while last-hitting minions.

Currently, she is so strong top that she reaps the highest win rate in high ELO Korean solo queue at 54.06% according to OP.GG.

In professional play, she was first picked in the LEC in week two. The crowd and casters went bananas as G2 Esports locked her in as the last pick on the red side against Origen.

Wunder Martin “Wunder” Nordahl Hansen went toe to toe against Ornn in CS, and impacted bot lane with Wish [R] in the mid game. After reaching her two item power spike with Athenes and Redemption, he grouped with his team and made G2 virtually unkillable.

Other pros who have successfully picked her on the main stage include HLE Lee “CuVee” Seong-jin against T1, APK Jeon “ikssu” Ik-soo ssu against Afreeca Freecs and CLG Kim “Ruin” Hyeong-min against Evil Geniuses.

Playing the long-con, the main focus of Soraka Top is to poke, sustain and manage waves to farm up for the mid game. She is played just like a Soraka Support would – except without wards.

Also on the rise is Sona Top, who is picked for the same reasons. The only difference is that her global impact on the map is lower than Soraka’s as she is more valuable grouped up.

There is at least another month before planned nerfs to Soraka and Sona in patch 10.4 hits pro play. Now that sustain numbers are surging in the Rift, will we see funnel comps make a full return with Taric mid alongside hypercarries?