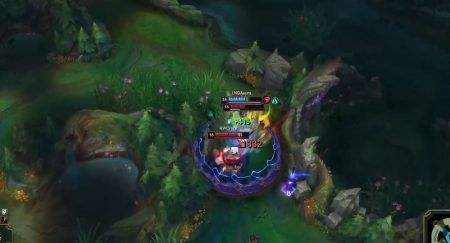 LNG then secured Baron buff, and extended their lead by pushing into RW’s base, but still could not end the game.

It was only at the 42-minute mark when RW overstepped as they attempted to find a pick onto Xiong “Xx” Yu-Long’s Elise. Using Repel, Xx denied them the kill as the rest of LNG collapsed, killing three.

Sidestepping Jarvan’s flag and drag combo, Asura used up the remaining bullets from Infernum, the Flamethrower before switching to Severum, the Scythe Pistol.

Together with the power of the Ocean Soul – where dealing damage to enemies heals the user and restores mana over three seconds – Severum additionally healed him for 20% of damage dealt.

If that wasn’t enough, Asura also had a Bloodthirster and Mercurial Scimitar that boosted his lifesteal even more.