The Chinese pro dominated the grand finals, winning 3-0, and taking home US$200,000 in prize money. 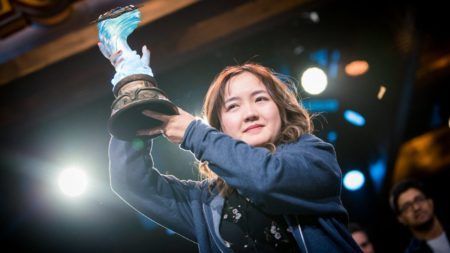 The path to BlizzCon was a long one for VKLiooon, as the China region is not part of Blizzard’s Grandmaster circuit. As such, she had to qualify for BlizzCon by playing open tournaments.

After her victory, an emotional VKLiooon thanked her fans for supporting her and shared with the BlizzCon crowd a story about how a few years ago, when she was at a major Hearthstone tournament, a male player told her that she was in the wrong queue because “this isn’t for you”.

VKLioon also had some words of encouragement for aspiring female players.

“I want to say for all the girls out there who have a dream for esports competition, for glory — if you want to do it and you believe in yourself, you should just forget your gender and go for it.”

“This is the best way to strike back at those people who doubted me only because I am a girl,” she continued. “It proves that girls can be strong pro players, just as guys do.”

Along with the Global Finals trophy, VKLioon took home US$200,000.