I’m holding out for a Reno. 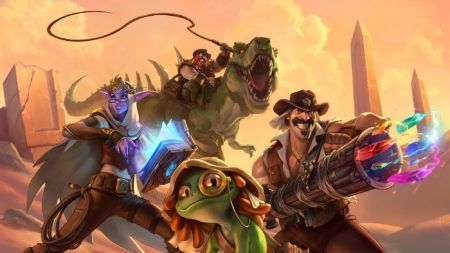 It’s time to stop the League of E.V.I.L.’s dastardly plans.

Having rampaged through Dalaran and stolen the city itself, the group of baddies is about to unleash mayhem in the ancient desert of Uldum.

Since Uldum is based on Ancient Egyptian mythology, expect to see mummified minions, reincarnation mechanics, and plague cards that will clear the board.

There will also be quests that can be cleared to earn game-changing cards as rewards. Players can either earn new Saviors of Uldum card packs from the Arena, buy them with in-game gold or real money. Logging in after the expansion is released will also grant you a free Legendary Quest card.

If you want to get a head start, you can pre-purchase the card packs in two bundle options — a US$50 50-pack bundle with a random golden Legendary card and an Elise Starseeker card back, or the US$80 80-pack bundle, which includes all of the above bonuses as well as a new Elise Starseeker Druid hero. The offer is available from today until the launch.

In the meantime, feel free to check out the awesome trailer below, which features a super-cool awesome-sounding psychedelic soundtrack.