Zowie has another winner on its hands. 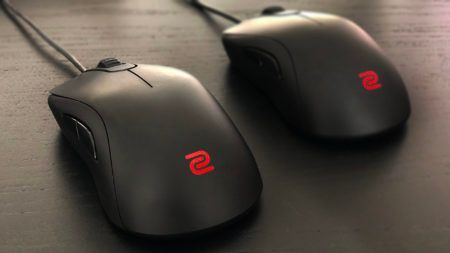 The latest addition to that lineup is the new S1 and S2, which build on all of these features, add a few new improvements too.

The S1 and S2 were actually available late last year as part of Zowie’s limited pink and blue Divina series, but are only now joining the main lineup in Zowie’s traditional muted matte black.

Both mice share the same ambidextrous shape, with the S1 being the larger option, and the S2 being slightly smaller and lighter.

This is probably the safest mouse shape that Zowie has come up with. The easiest way to describe it is that it feels a bit like a cross between Zowie’s existing FK and ZA line.

The S1 is slightly shorter than the FK1, but with a bigger hump that’s halfway between the low-profile hump on the FK1, and the huge hump on the ZA11. It’s a good compromise between the two mice: Big enough for you to wrap your palm around, but not so big that you lose fingertip control.

Like the FK and ZA mice, the sides of the S1 and S2 taper in slightly, which provides a really secure grip.

The slightly shorter design was developed to assist with vertical movement, which is a lot more prevalent in newer FPS titles like Overwatch, according to Zowie.

Surprisingly, unlike the FK and ZA series, despite having an ambidextrous shape, there are no buttons on the right-side of either mouse, which means they’re not suitable for left-handed gamers. Unfortunately, Zowie has told us that there are no plans for a left-handed version of the S series.

On the plus side, this has slightly reduced the weight of the mice, and the S1 and S2 are about 3g lighter than their FK and ZA equivalents.

My hand measures 19.5 x 10cm, which is average or slightly above average in size. Both mice are really comfortable in either palm or claw grip, but I found myself preferring the S1. For reference, my usual mouse is the ZA12.

Zowie is also known for its stiff Huano switches, which a lot of gamers seem to either love or hate. Personally, I’m quite fond of them, but I can see why many people dislike them. For the S series, Zowie is still using Huano switches, but they’re now much lighter than those used on Zowie’s other mice. They still offer a firm and satisfying click, but they’re much easier to press, which should make the mice more suitable for games that require rapid-fire clicking.

The scroll wheel is stepped and quite loud. Unfortunately, it’s not the smoothest scroll wheel I’ve used, and it feels a little flimsy. I don’t really use my scroll wheel while gaming, so it doesn’t bother me too much, but it’s not the best for everyday web browsing — these are esports mice through and through though, so you may want a different daily driver.

On the bottom of the mice there are two large feet, one in the front and one at the back, which is pretty much exactly the same as the FK and ZA series. The mouse glides smoothly, and Zowie doesn’t appear to have made any changes here.

Like all Zowie mice, there’s no software required for use; everything you need to adjust the mouse can be found on the bottom. Down here, you’ll find a DPI button that will let you cycle through four options: 400, 800, 1600, and 3200. You’ll also find a polling rate button for changing between 125Hz, 500Hz, and 1000Hz.

One nice change Zowie has made is to remove the sticker with the serial information from the bottom of the mouse, which sometimes used to scratch your mousepad (it’s now wrapped around the end of the cable).

At the front of each mouse, Zowie is using the same soft, flexible rubber cable as its other mice. It’s still one of the best cables around and Zowie has also thoughtfully angled the mouse cable slightly upwards on the S series to prevent it from dragging on your mouse pad (although this was never a problem if you use a mouse bungie).

Zowie’s FK and ZA series are looking a little dated now, with their much older Pixart PMW 3310 sensors, but the S series uses the newer Pixart PMW 3360, which is widely accepted as the best mouse sensor on the market right now. You’ll find the same sensor, or a proprietary version of it, inside almost every high-end pro-gaming mouse, including the Logitech G Pro Wireless, Razer Viper, and Finalmouse Air58 Ninja.

The sensor is positioned right in the middle of the mouse and, as expected, tracks flawlessly with no jitters, acceleration, or lift-off issues.

At S$129 (~US$93), the S1 and S2 are right in the middle of the price range for gaming mice. While they lack the bells and whistles of more expensive gaming mice like RGB lighting and wireless connectivity, they deliver in all the areas that actually affect in-game performance.

If you’re a Zowie fan or an FPS gamer looking for a new ambidextrous mouse with a 3360 sensor, the S1 and S2 should be right at the top of your wish list.