Razer DeathAdder V2 review: This is the upgrade you’ve been waiting for

A much lighter build, a better cable, and a top-notch sensor make this Deathadder worth upgrading for. 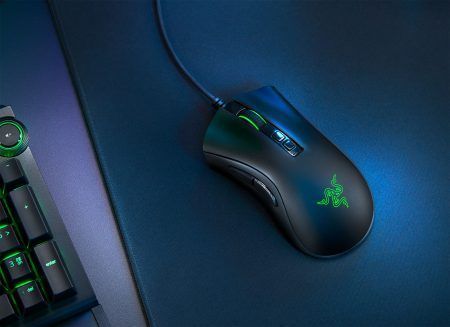 The Razer DeathAdder is probably the most famous gaming mouse in the world.

It’s one of the most popular mice among pro CS:GO players, it’s a common sight at Overwatch League matches, and even LoL superstar, Lee “Faker” Sang-hyeok, used to use one before he was sponsored by Corsair.

Razer has released over 11 official versions of the mouse since it first came out in 2006, and over 30 if you count game and team editions too.

But after 14 years, Razer has finally released what it calls the “V2” version of the DeathAdder, with an upgraded optical sensor, much lighter build, optical switches, and an improved Speedflex cable.

The DeathAdder V2 is mostly the same shape as the original DeathAdder, with only minor adjustments that you probably won’t notice. According to Razer “unnecessary finger drag points” have been eliminated, but you’ll be hard-pressed to point out where exactly.

Like all DeathAdders, the V2 has a large, ergonomic, right-handed shape that is only really suitable for palm and claw grip. It has a large hump in the middle of the mouse, and a fairly dramatic taper towards the right-side. The curves sort of force your hand into a very specific way of gripping the mouse, but if you can get used to it, it’s actually very comfortable.

The biggest change to the mouse is its massively reduced weight. The V2 weighs in at a lean 82g, making it the lightest DeathAdder Razer has ever made. For comparison, the previous iteration, the DeathAdder Elite, weighs 105g.

The reduced weight makes the V2 feel more nimble and spritely, although you’ll probably find yourself overflicking your headshots for at least the first week.

The other big upgrade is the V2’s new Speedflex cable. We first saw this cable on the Razer Viper, and I love it now as much as I did then.

The braided cable is light, flexible, and doesn’t kink or get tangled. It also has a low-drag cover that makes it just glide over the mousepad, so you don’t even need a mouse bungie.

While I know some gamers (like my colleague) will never go back to cables after using wireless, I know many people still prefer the reliability of a wired connection.

Like the Viper, the V2 also uses Razer’s new optical switches under the left and right-click. According to Razer, these will actuate up to three times faster than a mechanical switch, but honestly, there’s no tangible difference in response time in-game. As there are no moving parts however, the optical switches should be more durable.

The final major upgrade is the V2’s PMW3399 sensor, which we first saw on the Viper Elite. The 3399 is an improved version of the already-excellent PMW3389 used on the DeathAdder Elite, with an extended DPI range of 100-20,000.

As expected, the sensor tracks flawlessly with no prediction, acceleration, or spin out issues. According to Razer, the sensor also boasts next-gen features like Smart Tracking, Asymmetric Lift-Off, and Motion-Sync.

Smart Tracking automatically calibrates the sensor for your mousepad. Previously you needed to do this manually through Synapse. Asymmetric Lift-Off lets you adjust the lift-off distance of the sensor. Finally, Motion Sync syncs up the information from the sensor to the PC, ensuring it always has the most up-to-date information on the position of the mouse.

While some may criticize Razer for frivolously releasing new variants of the DeathAdder every other year, the V2 is an upgrade that needed to happen. The lighter weight makes it more suitable for fast-paced games with lots of vertical and horizontal movement like Overwatch, and the new cable is a massive upgrade over the older versions.

Verdict: If you’ve been waiting to upgrade your DeathAdder, this is the one.