Who is the Dendro Archon in Genshin Impact? Story, personality, first appearance

Are you smarter than an Archon? Flower power is all the rage with the release of the Sumeru region in Genshin Impact version 3.0.

Travelers can now venture into the Dendro-blessed land and learn about the people’s blooming lifestyle, but its main questline might leave a few wondering about the mysterious Dendro Archon.

If you’d like to know more about Sumeru’s very own god, here’s a quick introduction to the Dendro Archon in Genshin Impact, including its story, personality, and first appearance in the game.

Warning: Major spoilers if you have yet to play Archon questline of Sumeru (Chapter III).

Who is the Dendro Archon in Genshin Impact?

The youngest of the Seven gods of Teyvat, the Dendro Archon presides over the region of Sumeru. Natives regard the deity as the God of Wisdom and tap into its power with a device called the Akasha Terminal.

Similar to the story of Raiden Shogun, the Dendro Archon title has been given to two different people. The first person was Greater Lord Rukkhadevata, known for founding the Sumeru Akademiya, the nation’s main governing body that also doubles as an institute for scholars.

When Greater Lord Rukkhadevata died during the cataclysm 500 years ago, Lesser Lord Kusanali succeeded her as the new Archon. Just after Kusanali’s birth, she was taken by the sages of Sumeru to the Sanctuary of Surasthana, where she is currently living in isolation.

Despite Kusanali being the new Archon, the natives are unconcerned about her since the Akademiya — one of the biggest influences in the nation — pushes to further recognize the legacy of Rukkhadevata.

However, Kusanali still has a small following who organize the Sabzeruz Festival, a birthday event for the Dendro Archon. Followers like Dunyarzad Homayani and Nilou often face criticism and backlash from the Akademiya and other locals.

Personality of the Dendro Archon 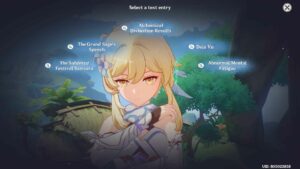 While she resides in the Sanctuary, Kusanali has the ability to appear in people’s dreams as Nahida, a short girl with pointy ears.

The Archon cherishes her most devoted followers. It is revealed that Kusanali once visited Dunyarzad in a dream to comfort her about her incurable disease, Eleazar.

Staying true to her title as the God of Wisdom, Kusanali often gives slight hints to the player without revealing the actual answer. During the quest to break the Samsara of Sabzeruz Festival, Kusanali introduces Contemplation, a game mechanic where players analyze different thoughts to form a conclusion.

Fellow Archon Zhongli first mentions Kusanali during Liyue’s Rite of Parting. After purchasing a kite constructed for the God of Wisdom, he points out the markings of a tree and leaf on its design, hinting at Kusanali’s Dendro powers.

Kusanali first appears onscreen in the second act of Archon Quest Chapter III, The Morn a Thousand Roses Brings. After experiencing deja vu, the player chases and finds Nahida standing next to a bedridden Dunyarzad.