Hands-on: Put your friendships to the test with Moving Out

Hilariously send waffles flying while on the job with the toaster head avatar. 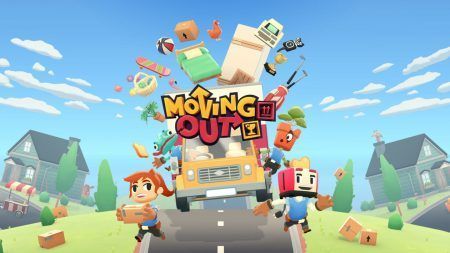 From the publishers of Overcooked comes Moving Out, a new physics-based furniture-moving co-op game coming out next month for Nintendo Switch, PlayStation 4, Xbox One, and Steam.

Like Overcooked, the co-op game is designed for up to four players, only this time, the goal is to move furniture out of a place and into a truck within a time limit.

As I’m a fan of Overcooked and Overcooked 2, I decided to try the demo with a friend on the Nintendo Switch. The demo contains three trial scenarios without any levels attached, and we ran through all of them.

But first, we needed to undergo “Mandatory Training” as newly recruited Furniture Arrangement & Relocation Technicians, or F.A.R.T. for short.

Before the tutorial started, we chose a character each. Unlike avatars in Overcooked, customization options are readily available.

After deciding which color variants we liked, the tutorial brought us through the controls of the game. We were taught to grab, throw, jump, and curiously, slap.

The first scenario of the demo is extremely typical. Our task was to move items out of a one-bedroom house into a parked truck in the driveway.

To assess the house, you press the up button to highlight two very important pieces of information: Which items need to be moved, and the number of people required to move each item.

One of the best things about Moving Out is that you can break windows (among other things) to allow you to move around the house more freely without penalty. However, the convenience stops there. There’s no cheating when it comes to the bulky, heavy stuff.

Being a physics-based game, the coordination required to move a sofa felt similar to real life, minus the heaviness of course. We had to lift the sofa from each end, and angle it properly while moving it through doorways or it would not fit at all.

The one thing they don’t teach you in the tutorial is how to stack items in the truck. We threw in small, loose items before realizing we couldn’t fit the bed. Just like in real life, it was more logical to store the large, bulky items first, then place the lighter things on top.

The next two scenarios gave a taste of the challenges Moving Out holds. Set in different environments, we experienced moving things out of a haunted house with ghosts that needed slapping, and shifting items across a busy road and a river with moving platforms.

If you thought Overcooked was difficult, Moving Out bears one key difference – you need to work directly with your friends in order to complete tasks, meaning if one person messes up and moves in the wrong direction, the trajectory of the bulky item in hand will be derailed.

The only thing that made me slightly uncomfortable is the constant need to hold. Holding an item in this game literally requires you to hold onto the SR side button because other buttons are required for jumping, aiming, throwing, and slapping.

My friend and I fell off moving platforms into the river many times, causing me to laugh so hard that I cried. We learned that delegation in the kitchen may spell trouble, but co-ordination required to carry one item is formidable.

Like Overcooked, Moving Out is here to test your friendships (again).

Moving Out will be released on April 28 on Nintendo Switch, PlayStation 4, Steam and Xbox One.

READ MORE: All you need to know about Nintendo’s surprise Direct Mini