Hands-on: Marvel’s Avengers makes you feel like an overpowered superhero 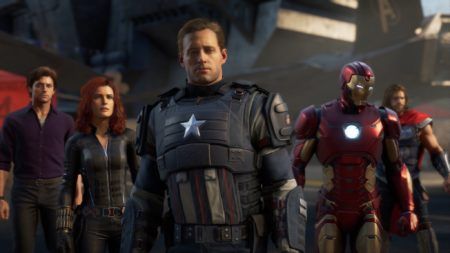 Head down to GameStart Asia at Singapore’s Suntec Convention Centre this weekend and you’ll be able to try out Crystal Dynamics’ new Marvel’s Avengers game.

The highly anticipated title lets you step into the shoes of all of your favorite Avengers in a completely new story that feels like it could be the latest chapter of the MCU. Well, sort of.

While all of the Avengers are present and accounted for, they look a bit different from their cinematic counterparts — it almost looks like the game is a fanmade movie with lookalikes standing in for the Hollywood A-listers. Presumably, this is all due to the licensing costs of using the likenesses of the actual A-listers in the game.

The game begins in San Francisco, during a celebration for Avengers Day, when an attack interrupts the festivities. The Avengers assemble, and you’re introduced to each of them, playing through a five-minute or so action sequence where you get to take their powers for a spin.

You get to play as Thor first. His gameplay sets the tone early, having you absolutely destroy an army of nameless soldiers as you make your way to the Golden Gate Bridge. Playing Thor feels a lot like playing God of War, with lots of third-person button-mashing, punctuated by the occasional quick-time event.

Just like movie Thor, you can throw your hammer Mjolnir and use it as a projectile weapon before summoning it back to your hands. You can also call down bolts of lightning to smite your foes, or just beat them to a pulp with your bare hands. The whole thing makes you feel incredibly overpowered, but I suppose that’s the point when you’re playing the God of Thunder.

After finishing this sequence you’ll swap over to Iron Man, who starts off flying through the air as he heads to the bridge. The flying sequence plays like a rail shooter, and you get to zip around the screen blasting enemies out of the sky. After he lands, the game transitions to ground-based combat which has you fighting more nameless grunts.

To Crystal Dynamics’ credit, all of the heroes play and feel very differently. Iron Man on the ground is faster and more agile than Thor. He can float above the ground and use his array of lasers and repulsor beams to blast enemies from near and far. His super attack is a huge Unibeam that is great at clearing our waves of mobs.

After you’re done with Iron Man, Hulk gets to take over. I had the most fun playing as the big, green guy. His attacks, while slow, felt absolutely devastating. As Hulk you can even pick up an enemy and use them as a weapon to hit other bad guys, which is just as fun as it sounds.

Captain America came next, although this time you’re fighting on the bridge of the S.H.I.E.L.D. Helicarrier. Captain America uses an assortment of martial arts skills to fight, and naturally, he can also block attacks with his shield, or throw it for a long-range attack. Compared to the first three characters, Cap felt a little underwhelming, as he doesn’t have the flashy moves or charisma of his co-stars — sort of like the movies really.

Last up, you get to play as Black Widow as she fights the mastermind behind this entire attack: The Taskmaster. Black Widow feels like a faster version of Cap, with an assortment of lightning-quick martial arts skills. She also has a cool ability that lets her turn invisible.

The boss fight itself was quite fun, and definitely more challenging than the countless minions you’ve been mowing down so far.

At the end of the intro, the Helicarrier explodes, destroying a large chunk of the city, and seemingly killing Captain America. But this being a superhero game, I don’t expect his death to be particularly permanent.

Marvel’s Avengers looks amazing and the short demo I played was fun, but it doesn’t really feel that different from countless other third-person action games. You’ll spend a lot of time button mashing your way through waves of grunts, and completing quick-time events. And while each hero’s unique style of gameplay does a good job at capturing the feel of that particular Avenger, you’ll probably find playing some more enjoyable than others. Personally, I found myself just wanting to play as the Hulk the entire time.

The hands-on I played only covered the first mission of the game, and there promises to be a lot more content when the game is released, which could make it stand out more.

You’ll also have access to hero customization for each Avenger, which could make boring heroes more interesting to play. I don’t expect every mission to feel as linear as the introductory one, either.