The World Tour will cover ground in eleven cities and four countries. 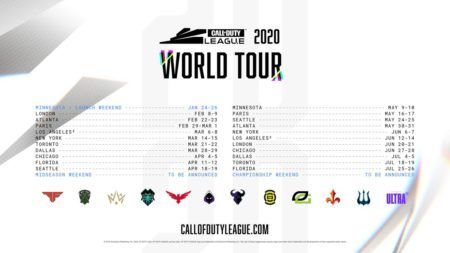 The Call of Duty League has unveiled the full schedule of its CODL 2020 World Tour in an official tweet. Action follows soon after its Launch Weekend happening on January 24 in Minnesota.

The World Tour will start its second half back in Minnesota on May 9. With the same locations as the first half, teams will have a second go at taking home a win in another city.

After its last stop in Florida on July 25-26, the 2020 World Tour will end the season with a Championship Weekend. The location and date will be announced later.

For more information about the CODL 2020 World Tour, you can sign up for updates on the League’s official website.

READ MORE: Call of Duty League will start on January 24