A short time ago, in a Battle Royale far, far away… 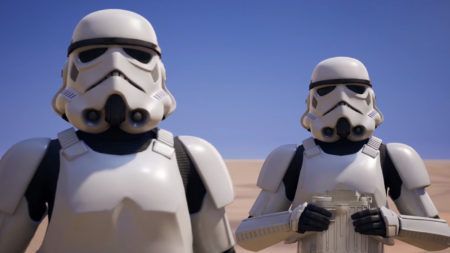 Fortnite has just capitalized on another famous pop-culture brand. This time, they’ve partnered with Star Wars, and players can now drop in as a Stormtrooper in Fortnite’s Battle Royale.

The iconic Stormtrooper skin is available at the item shop for 1,500 VBucks (Fortnite’s in-game currency).

Those who’ve bought Star Wars Jedi: Fallen Order on the Epic Games Store will be able to unlock the Stormtrooper suit in Fortnite.

Fortnite is in its own league when it comes to collaborating with other well-known brands. They’ve previously partnered with Marvel Studios during the release of Avengers Infinity War. And, during the release of John Wick: Chapter 3 – Parabellum in the cinemas, Epic Games released a John Wick skin along with an event called “Wick’s Bounty.”

Now, with the upcoming major movie blockbuster Star Wars: The Rise of Skywalker set to release in December, Epic Games was able to capitalize on fan’s excitement.