Set your enemies aflame with Mikoto’s pro tips on how to play Ember Spirit. 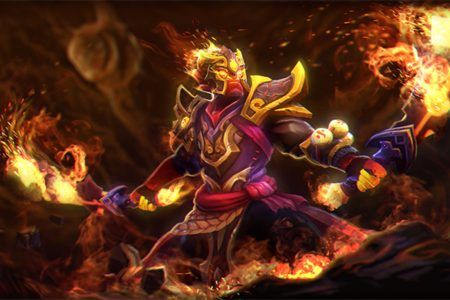 Rafli Fathur “Mikoto” Rahman is the midlaner for BOOM Esports, one of the strongest teams in Southeast Asia.

The Indonesian prodigy is among the best midlaners in the region and one of his most-played heroes is Ember Spirit, arguably the flashiest carry hero in the game.

Here are five tips from Mikoto himself to help you burn your enemies down:

1. Know your hero and your matchups

Ember Spirit is kind of a ridiculous hero, I think. His ultimate is like a free Boots of Travel on top of other skills that are very strong in teamfights. He’s also very versatile. I think you can always pick him during the draft even if he gets countered really hard since you can still find a way to play around everything.

You can even make him a support if you can find a better core hero later on in the draft, but the best position for him is always as the mid or carry.

I think Void Spirit, Kunkka, Templar Assassin, and Puck are good matchups for him. But it still depends on the play, sometimes you can still lose against those heroes if the other player is good. On the other hand, I think Necrophos, Shadow Fiend, and Monkey King are the hardest counters for Ember Spirit.

The best lane for Ember Spirit is always different and depends on the patch and your team. Sometimes, you need to carry your team as the midlaner because you’re up against a farming hero at mid like Arc Warden or Alchemist. Other times you can be up against more sacrificial heroes like Tiny or Void Spirit that need to make space for the enemy team.

It’s easier when you’re on the safelane though because you’ll have a support with you. The drawback is that you won’t level up as fast if you were at mid.

When it comes to choosing the right skill build for Ember Spirit, it really depends on the matchup. For example, if you’re laning against a hero with lots of magic damage like Zeus then you should max Flame Guard first. But usually it’s a good idea to max Sleight of Fist while having at least one level in Searing Chains before level six.

Whether you max Sleight of Fist or Flame Guard first doesn’t matter too much because you’ll be dealing a lot of damage either way, which is the important thing.

4. Get the right items

Ember Spirit’s item builds will again depend on your matchups. If the enemy team has an illusion hero like Phantom Lancer then you build Maelstrom as your first core item. If there is a hero with a lot of regen like Necrophos or your team has an early timing it’s good to build Spirit Vessel. While I think it’s an old build, getting Desolator is good if your team lacks physical damage.

But in my opinion Ember just needs to build for magical damage because, as a mid player, I need to make time and space for my carry so he can win the game for us. With that in mind, getting items that deal magical damage like Maelstrom, Spirit Vessel, and Blade Mail is the best build for me.

After your core items whatever you get will depend on what you or your team needs. Black King Bar is always a must-buy, of course. Shiva’s Guard is good too if you need more armor. While I think you don’t always need it, Aghanim’s Scepter is also good if you need to jump on the enemy backlines.

Ember Spirit is a very good fighter, but you still need to find some time to farm because you need items to get tankier and increase your damage output. You have to find the right balance between fighting and farming. Usually I fight more often than I farm because of how my team likes to play with Ember.

Whichever you prioritize, always remember that you need to be making space for your carry by fighting with your team as much as possible. However, keep in mind that you are still a secondary core so don’t forget to farm and keep up in net worth.