The long and winding road – by Black^ 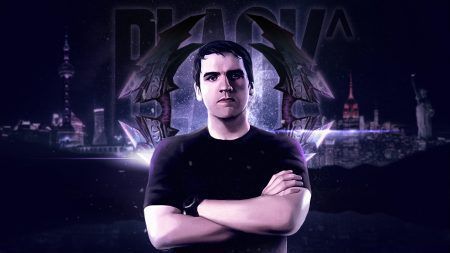 My name is Dominik Reitmeier, but you probably know me better as Black^. I’ve been a professional Dota 2 player for a decade now and, as far as I know, I’m the only pro to have played in five out of the six major regions – CIS being the only one that I’m missing (so far).

As most people know, my most recent team was T1. My short time with T1 wasn’t what you would call successful, but I’m thankful to the organization for giving me the opportunity to play with them.

I’ve left teams before, and I won’t lie, each time there’s been a degree of sadness and regret.

The reason I left T1 is because it just wasn’t the right fit for me, not so much as a player, but because of who I am as a person right now.

Maybe that sounds like a cop-out, but I’ve spent the last week reflecting on my career and the events that led me to where I am now, and I know leaving was the right thing to do.

For you to understand what I mean, let me take you back to 2013.

In August 2013, I played my second TI with Mousesports. We had a rough Group Stage, going 4-10, and we ended up losing in the first round of the Losers Bracket to LGD.int.

After TI, LGD.int actually reached out to me and asked me to be a part of their roster. I was over the moon. I’ve always respected Chinese culture and how hard they work and train every day and I accepted immediately.

But then something happened that changed me forever.

I lost my dad to cancer shortly after I made the decision to go to China. I was devastated. My dad was the person that first introduced me to video games, and he was always the person I looked up to the most. I’ll never forget in his final days when he told me, “Dominik, go to school and further your studies or your degree will go to waste.”

Obviously, I didn’t listen to him and I chose to pursue my dream, but for me, pursuing Dota was something that helped me get over my loss. My dad taught me to never give up and to stand up again after you fall, and I’ve always tried to live my life that way.

Looking back, I realize that his words put more pressure on me than I initially thought, but now I like to think of them as motivation, not pressure.

To this day, my biggest motivation is still to make him proud and show him that I didn’t make the wrong decision.

Shortly after my dad passed away, I ended up getting really sick myself. I went to a doctor and discovered I had advanced stage Non-Hodgkin Lymphoma. Cancer. I made the decision not to share the news with anyone, not even my mom or my brother because they had already suffered enough and I didn’t want to put them through more pain. The doctors gave me about a year to live unless I could get a bone marrow transplant.

Fortunately, a donor was found. I was away from home a lot with boot camps and tournaments and somehow I managed to hide the entire treatment process from my family. The operation went well and I made a complete recovery. But while I was sick I always remembered what my dad taught me. Never give up. Always live life to your fullest. Remembering him and everything he taught me gave me the strength to get through that situation.

When I finally arrived in China, I learned a lot — not just in Dota — but about myself. With everything that had just happened weighing on my mind, living in China taught me how to be a better person.

Although the team had quite poor results, it was the first stepping stone for me in my international career. The team ended up disbanding later that year, but I decided I wanted to stay in China and look for more opportunities to improve and learn.

2014 was a big year for me. After a couple of months in China by myself, Team DK asked me to stand in for BurNing, who was sick at the time. Finally, I thought, my hard work will pay off. I had spent countless hours over the past few months learning Chinese so I could communicate better with my Chinese teammates, and even more hours practicing plays in Dota.

After a very successful stint as a stand-in for DK, Team CIS-Game asked me to join their team, and not only that, but to be their captain. While the team had four relatively unknown members, I knew this was a chance for me to prove how good I really am.

I joined the team and led the four youngsters through a very tough Chinese TI qualifier. Everyone thought we had no chance, but we proved them wrong and made it all the way to TI4. In the end, we lost in the Phase One playoffs to Team Liquid, but I’ll always be proud of what we were able to accomplish.

After our run at TI4, I became more well-known, especially in China. This led to me eventually being asked to join Vici Gaming, the TI4 runners-up. It was a great honor to be asked to play for such an illustrious team, but at the same time, I knew all eyes would be on me and I knew I had some big shoes to fill.

I immediately resolved to double down and work even harder. When I arrived back in China, my manager quickly helped me find a private Chinese teacher, and I studied for two hours every day to further improve my language skills. At first, it was very difficult, and I had trouble adjusting to the high-level of the team, but as more time passed, I became more comfortable and improved a lot as a player. In all honesty, I think it’s fair to say that I was one of the best players in China at the time.

In October that year, Vici Gaming won ESL New York 2014. It was the first time I had ever won a LAN tournament against the very best players in the world.

I will never forget the Grand Final against Evil Geniuses. I played far better than anyone ever expected, and game three of that series is probably the best game of Dota I’ve ever played. It was hard-fought, but I played like I was possessed and I carried Vici to victory. I can’t even begin to describe the feeling.

As EG called GG and I knew we had won, I let out a scream of joy that was so loud even the commentator desk heard it. This was the moment that proved that I had what it took to be the best in the world.

In 2015, we played the Dota Asian Championship, which at the time was also known as Mini TI due to its $3 million prize pool. We cruised through the Group Stage and made it to the Grand Final without dropping a single series.

In the Grand Final we rematched against EG, but this time, we were no match for them, and they beat us 3-0. EG was the best team that year, and they later went on to win TI5, but losing to them so badly was one of the worst defeats of my life.

After the final, news broke that Newbee would be disbanding, so Vici jumped at the opportunity to sign Hao, who was generally considered the best carry in China at the time, and also to make the roster fully Chinese.

I knew what that meant for me. I had lost my chance to compete at TI, and just months after my biggest accomplishment, the dream that I had worked so hard for was on the verge of slipping away.

My self-confidence took a huge hit and I fell into a very dark place, one that took me a long time to get out of. Looking back now, I know why it happened, but at the time, it felt like my whole world had been shattered.

It wasn’t until the following year that I finally got back onto a proper team when I joined Faceless. We were doing really well in the South East Asia region, but sadly we always underperformed in international competition.

In all honesty, I blame myself. I still hadn’t fully recovered from what happened with VG, and I wasn’t in the best mental state at the time. Looking back now, I regret many of the decisions I made. I wasn’t a good teammate, and I constantly urged and rushed people to play better because I felt like I needed to get back to the top right away.

In the past, I used to be that guy that raised the team morale and kept everyone happy and hyped to play, but during this period, I was the complete opposite. Nothing was ever good enough for me and I kept trying to push people past their limit. Sadly, this period also damaged my relationship with iceiceice, who I still consider one of my closest friends, and who I really owe a lot to in my life.

In July 2017, Faceless disbanded and I spent some time away from the pro scene. I took jobs as an analyst and caster, but while I enjoyed those roles, I always felt a desire to get back into playing, but I knew I needed time to reset and overcome the negativity that had been brewing in my head for the past few years.

So why did I leave T1? After everything I’ve been through, both physically and mentally over the past ten years, I’m at a point in my life now where finding the right situation is the most important thing to me. I truly believe that with the right organization, the right team, and the right opportunity I can be the best player in the world.

I don’t know what the future holds for me. If this is it, I’ve had a good run. Better than most.

Leaving T1 was bittersweet, but my short time with the team rekindled a fire inside me that I thought I had lost forever. I’ve never been more determined than I am right now to prove myself. I’m more mature now, and I’ve learned so much from my experiences, and I feel like I’m a better player now than I’ve ever been.

It’s been a long and winding road, but I know I’m just at the start of it.

(A week after this article was posted, Black^ signed a new contract with LGD.int – Ed)