All the hero buffs and nerfs from the Outlanders Update

Here’s every nerf and buff that you need to know. 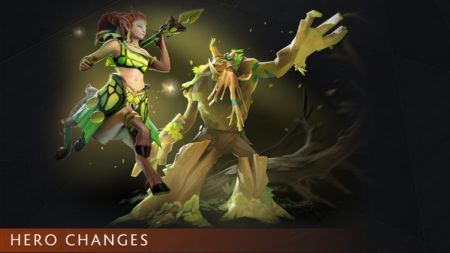 The much-awaited Dota 2 Outlanders Update has been released and there is so much to break down, that the game looks and feels completely different now.

Included in the update are all the notable Hero Changes, along with all the buffs, nerfs, and reworked heroes. Here are all the important changes we noticed from the 7.23 patch notes. If you’re looking for the Aghanim’s Scepter buffs, head here instead.

Razor‘s new Storm Surge ability, along with the newly reworked Static Link will let him make an impact in the middle lane. It’s similar to Gyrocopter’s Side Gunner Aghanim’s Scepter upgrade, but, Static Link will be available at level 1.

Treant Protector has lost its global cast range for Living Armor, but the armor increase together with the heal makes him a more viable support hero. The new Nature’s Grasp ability also gives the hero better support options on the side lanes.

Luna’s stats increases will set up the hero for success in the laning stage. And, the changes to Moon Glaive and Lunar Blessing will be critical abilities that will have an effect during team fights.

Ursa‘s new Earthshock is very similar to Slark’s Pounce, but Ursa will have much more kill potential in the early stages of the game with the Overpower and Fury Swipes abilities.

Medusa‘s reworked Mystic Snake and Stone Gaze will help the hero deal more damage during team fights by slowing and chasing down key targets when the heroine activates Stone Gaze.

Puck was already incredibly mobile even before the patch, but with the new Waning Rift, the hero will now be much harder to lockdown.

Magnus‘s changes have dramatically nerfed the hero as a Position 4 and Position 5 support. But, as a core, the hero will be able to farm much faster with the double effect Empower on himself. With a Blink Dagger and a Refresher Orb, Magnus is still one of the best initiators in Dota 2’s roster.

Earthshaker‘s Aghanim’s Scepter upgrade for Enchant Totem can now be interrupted. This means the hero will not have a guaranteed leap initiation anymore. This nerf will also affect the very popular Morphling-Earthshaker combo.

Chen‘s abilities will now cost more mana, and his level 10 Talent “+30% experience gain” is now gone. This means the hero will have a difficult time keeping up in levels.

Faceless Void‘s Chronosphere ultimate cooldown has been increased and it cannot be lowered by an Aghanim’s Scepter upgrade anymore. Instead spending 4,200 gold on the Scepter gives you an initiation disable instead. But, maybe this could work well in team fights once opponents no longer have Spell Immunity abilities.

Morphling has finally been nerfed. Players can no longer switch health and mana with their Morphed form targets, which means the hero will now be easier to take down.

Pugna‘s tower pressure and timing push strategies will be a bit more difficult to pull off. Instead of the Nether Ward dishing out damage based on mana percentage of the spells used, it now has a base 50 damage.

Tiny as a roamer will be much more difficult now compared to the previous patch. With lesser base damage and decreased move speed with the Tree Grab, harassing lanes and ganking heroes will be harder to pull off.

Venomancer‘s Poison Sting is no longer a damage per second ability. The passive skill will now instead reduce regeneration by 30%. The skill is good against heroes with burst health regeneration abilities like Alchemist, but other heroes will be fine with losing regen instead of losing actual hit points.

Heroes that were reworked:

Drow Ranger no longer has Precision Aura, which means players can no longer activate the Aura with Catapult waves to chip away enemy Tower’s health points. It has been replaced with Multishot, which lets Drow Ranger do quick burst damage. Allied ranged heroes will still receive an agility bonus that could still be used for tower pressure.

Lone Druid‘s newly reworked Spirit Bear will now scale alongside the hero. The hero’s True Form is now a proper ultimate with a health and armor bonus.

Riki has been reverted back to the original version of the hero from Dota 1. The hero is now a vulnerable target up until the player reaches level 6, since Cloak and Dagger is now an ultimate.

Shadow Fiend‘s ultimate no longer reduces the enemy hero’s attack damage. The ultimate has been reworked to force targets to run away, which will give Shadow Fiend and allied heroes an advantage in team fights when used properly.

Undying‘s change is Valve’s way to make the hero a more playable character. Instead of just throwing a Tombstone and spamming spells, players can be more creative with the hero now that his ultimate slows and applies damage per second to enemy heroes on attacks.

Viper is still going to be a viable mid-lane hero pick. The hero will still be able to zone out opponents with the Nethertoxin and Poison Attack abilities.

READ MORE: Into the Invitational: J.Storm is looking to solidify their claim as TI contenders